Namibia is a beautiful country and it is much too bad to make vacations only in Bitterwasser.

Our tip: Fly in Bitterwasser for a few days/weeks and then bring your family to go on safari with them.

Namibia (officially: Republic of Namibia; is a country in southern Africa between Angola, Botswana, Zambia, South Africa and the Atlantic Ocean. A border of up to 100 meters - and thus the only four-country corner on earth - with Zimbabwe is disputed.

The arid landscape was originally inhabited by the San ("Bushman") and Damara peoples. From about the 14th century, Bantu migrated into the country as part of the Bantu Migration. The area of present-day Namibia became a German "protectorate" in 1884 and remained a German colony called German Southwest Africa until the end of World War I. Between 1904 and 1908, the German colonial power violently put down the Herero and Nama uprising, committing genocide. In 1920, the League of Nations placed Namibia under South African mandate - effectively as a South African colony - which introduced its own laws, such as those on apartheid, into Namibia.

Namibia gained independence from South Africa in the wake of the Namibian Liberation Struggle on March 21, 1990, with the exception of Walvis Bay and the Penguin Islands, which were under South African control until 1994. March 21 has been the country's national holiday ever since. The capital and largest city of Namibia is Windhoek. The country has been a member of the United Nations (UN), the Southern African Development Community (SADC), the Southern African Customs Union (SACU), the African Union (AU) and the Commonwealth of Nations since 1990 (Resolution 652).

Namibia is sparsely populated due to the large area of the Namib. The country has about 2.3 million inhabitants. Eighteen percent of the population lives below the Namibian poverty line (as of November 2016), down from 28.7 percent in 2009.[4] Namibia has a stable parliamentary democracy. The Namibian economy is heavily dominated by agriculture, tourism, and mining (uranium, gold, silver, and base metals). 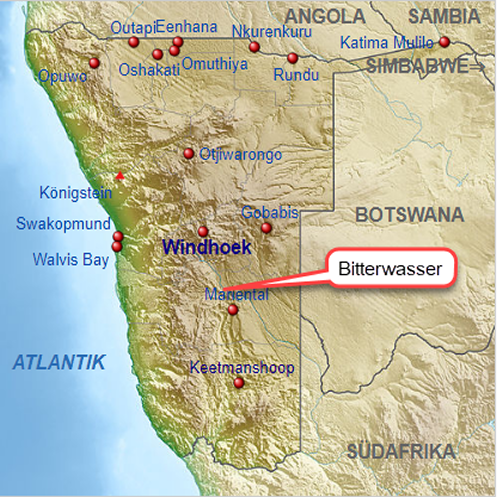 As far as the wings carry on 3.000.000 sqm flying area international pilots find best conditions for outstanding flight performances. Bitterwasser is probably one of the largest airfields for gliding in the world! A lot of space always means safety!

This handout as PDF